A manufacturer and distributor of point-of-purchase marketing paraphernalia builds a web application that allows its clients to coordinate with vendors and place custom orders online. 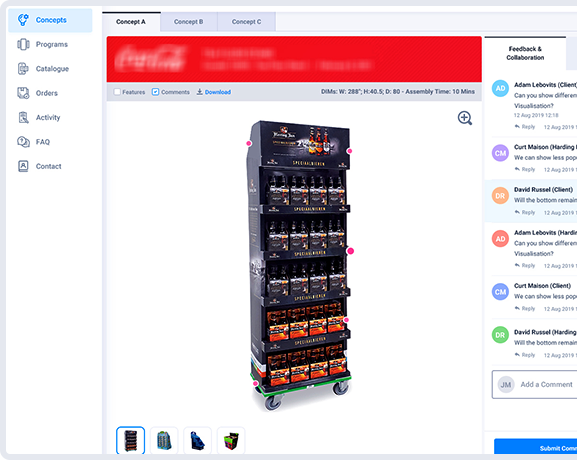 An online web-based B2B portal augmented by an administrative panel 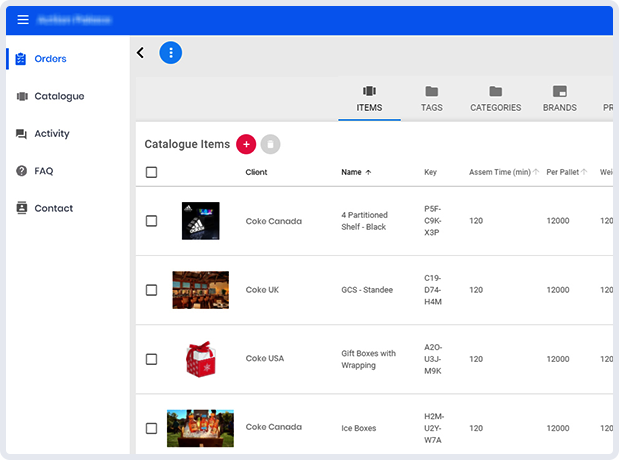 The Marketing Activation Planning Tool (MAPT) is a web-based B2B portal that bridges the gap between two business entities, 1) companies looking to have their point-of-purchase (POP) marketing needs fulfilled, and 2) manufacturers who supply marketing activation materials to fulfil these needs. The tool focuses on smoothing the communication and information exchange as well as improving process flow between client companies and manufacturers.

By deconstructing complex business processes and supply chain requirements, we were able to digitise critical B2B transactions and activities such as product development, order aggregation, manufacturing, logistics, and business analytics.

Based in Canada, Harding Display is a leading B2B provider of point-of-purchase displays and in-store marketing solutions. Founded in 1927, the company has continually reinvented itself to support its clients with innovative design and logistical solutions needed to succeed in retail. 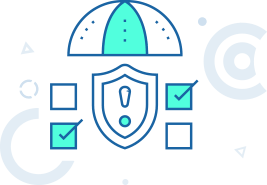 Our client Harding Display felt that their customers were not satisfied with their existing system. Customers expressed the need for a system that they could use to view the product catalogue, access their order history, and place new custom orders easily and in one place. They called for digitisation.

This realisation led our client to further explore the problems that they could solve for themselves as well as other manufacturers in the industry. They wanted to simplify this process for other vendors in the industry too. 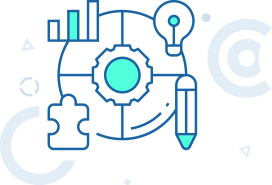 We solved our client’s problems with a B2B web portal that would facilitate suppliers, such as our client, and also their customers. The web portal is in the form of a consolidated platform that evolved quite a bit over the course of the product development process. With each version of the product, the scope of the project expanded. To put it simply, the project was divided into three broad phases.

Initially, our client only focused on the digitisation of their basic B2B processes. The first phase of the project was limited to online order placement and tracking, along with certain reporting functionality for our client and their customers.

Realising the potential that the system held, our client decided to expand the system by extending it to other manufacturers and vendors offering POP displays, which was akin to forming an industry-wide consortium. Thus a separate dashboard was added to the system that would allow manufacturers and their staff members to log in and manage their business operations.

In the final phase, we revisited the basics: improving the products (items) offered by the manufacturers. We added a feature that allowed customers to use our portal to customise the design for items instead of having to discuss modifications with the manufacturers off-system.

Do you wish to partner up with an experienced team providing top-notch B2B web portal development services?

Drop Us A Message

The first dashboard is for the customer, where the permissions for each feature are determined by the user’s role, i.e., Procurement Manager, Project Manager, or Sales Representative. 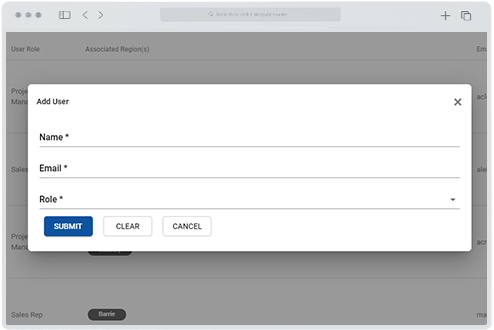 There is some overlap in the roles of procurement managers and project managers. The dashboard allows them both to set up Programs, i.e. named events for which they require marketing displays. However, the procurement manager needs to sign off on any programs created by the project manager. When a program is created, the manager needs to fill in its details, such as ID, brand name, geographic region, budget, and starting and ending dates. Managers can also add new shipping locations or addresses to their company profile. 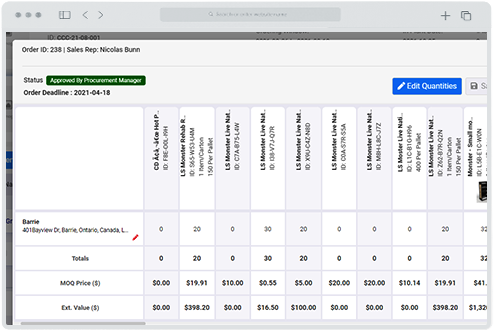 Procurement managers can use the dashboard to add more staff members to their organisation’s profile and assign them appropriate roles. They can also manage all the new programs and orders awaiting approval, and access reporting tools. When viewing order reports, procurement managers can choose to approve multiple orders in bulk. If an order’s deadline passes, they can upload purchase order documents and forward them to the vendor.

The dashboard offered to project managers primarily helps them create new programs and forward them for approval. It also features an order management tab where they can view or edit queued orders. Once an order is approved by the project manager, it pops up on the procurement manager’s dashboard for final approval. 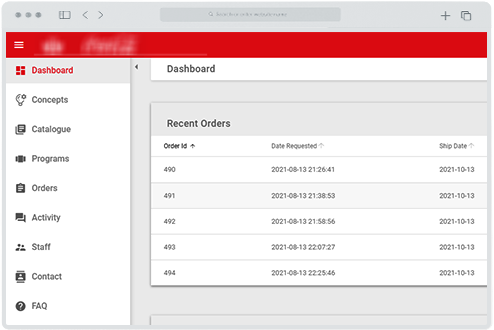 The dashboard for sales representatives has a limited set of features available. It does not allow users to add programs or regions or access reports. However, they can view a list of programs and access the address book. Sales representatives who are assigned to a particular region can add new orders to active programs for different unique locations within that region and select appropriate items from the catalogue. They can also add new shipping addresses to the system. The system conjures up an efficient and user-friendly representation of order details in the form of an ‘order grid’ that is easy to read and analyse. These orders are sent to their respective project manager or procurement manager for further approval. 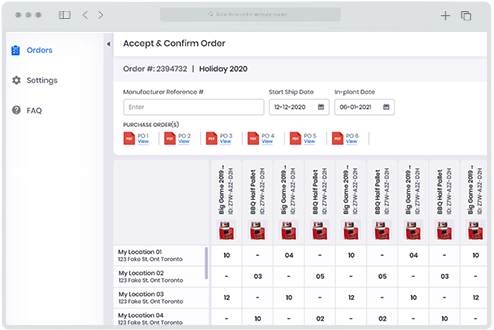 For manufacturers, the key user activity of accepting incoming orders falls under the sales and management roles. Operations related to shipping and tracking fall upon users assigned logistics roles. They update the system when a certain shipment is sent on its way. This status is then visible to the respective customers. In the Orders tab, manufacturers can view a list of all pending and accepted orders from various clients.

All users have a profile management section on their dashboards where they can update their personal information, profile images, and passwords. The dashboard allows all users to keep an eye on all activities happening within a program via in-app notifications.

All user types can run searches with custom search criteria if they wish to view details for a particular program, order, item in the catalogue, or location in the address directory. Different filters can also be applied, e.g. for items, users can search by name, ID, brand, and price. 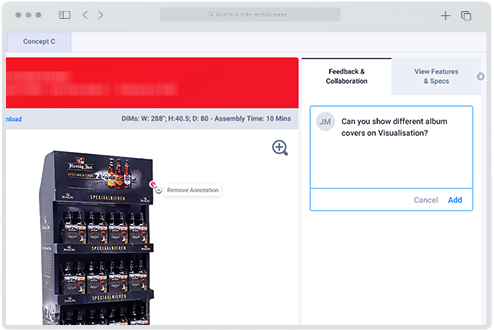 One of the key motivations behind this B2B platform development project was to simplify and streamline the communication between client companies and suppliers. We achieved this by adding a commenting feature in the app that customers can use to ask questions about a product or request changes to existing products that they wish to add to their campaigns. Manufacturers can respond using the same feature. Both parties can come to an agreement after a trouble-free back-and-forth within the system.

This project required the implementation of complicated business logic that revolved around multiple business functions, such as sales, manufacturing, and logistics. Despite that, our team was successful in designing the B2B portal in such a way that it is user-friendly and intuitive for all user types, that is, the super admin, manufacturers, and customers. After several iterations, the best possible design was decided in order to efficiently convey the plethora of information to the viewers.

This feature is built for Procurement Managers and Project Managers to allow them to view three different kinds of reports, categorised by territory, shipping location, and item type. They can view details of all orders placed for a particular region or shipping destination, as well as sort orders by item types and their total quantities ordered. 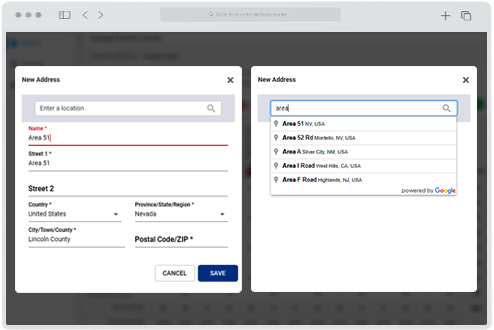 To make the address book efficient and accurate and eliminate duplicates, we have implemented a Google Maps API integration within the system. When a user tries to add a new location to their address book, they can search said address on Maps and have certain fields auto-filled.

After the initial exchange of information and ideas with our client, we came up with some mockups to lay out the flow of the web application. We conducted several follow-up sessions with the client and, after multiple revisions, finally received the go-ahead for a final version of the mockups. Then came the design phase, where screens were built upon the wireframes.

Relevant roles were filled in the team, followed by resource assignments. The project was broken down into key milestones. We proposed a tentative timeline to our client and then started the B2B platform development process.

Upon completion of the coding process, our QA engineers conducted three types of rigorous testing: functional, regression, and smoke testing. The final step was user acceptance testing, after which the program was ready to be released to end-users.

The B2B web portal development process was overseen by a project manager who led a team comprising a business analyst, a UI/UX designer, a technical lead, junior and senior developers, and two QA engineers.

Things
we do next